Turbo Cuts provides exactly the amount of energy needed to get you up, moving and focused on your goals. With this it offers unparalleled appetite suppression, making your fat loss efforts a breeze!

With ingredients like caffeine for increased energy, solid doses of camellia sinensis extract and citrus aurantium for their renowned effects on metabolic rate and blood sugar regulation, plus firm favourite L-tyrosine for cognitive enhancement, Turbo Cuts is a fat burner with some serious credibility.

With Pure Labs Turbo Cuts you are guaranteed to see results in reduced fat and appetite suppression!

The long anticipated heavyweight of the fat burning world has arrived. Pure Labs have created some fantastic products in the way of fat burners and pre workouts, but this time have taken what is best about of these products and applied it to one supplement.

Turbo Cuts provides exactly the amount of energy needed to get you up, moving and focused on your goals.

With this it offers unparalleled appetite suppression because Pure Labs understand what it takes to get great results fast.

Tyrosine is often used by athletes because of their effect of activating metabolic pathways. However, when tyrosine is supplemented orally by humans it has also been shown by clinical studies to improve stress-induced cognitive processes and behavioural deficits, in particular working memory, and stress-sensitive focus tasks. It therefore carries over to exercise because extended exercise is associated with central metabolic and neuroendocrine changes that may ultimately result in you feeling fatigue.

Caffeine reduces the ability of adenosine to bind to the receptors thereby preventing it from causing neural activity to slow down and make you feel sleepy. With the nerve cells being stimulated through the introduction of caffeine, they release the hormone epinephrine (adrenaline), which causes; an increase in blood flow to muscles, improved transportation of oxygen throughout the body, performance enhancement.

This is the plant name from the more commonly known green tea, this is used to enhance cognition especially mental alertness and focus. It is also loaded with catechins and flavonoids which have been proven to reduce free radicals that occur through stress or intense bouts of physical activity. In some significant clinical trials it has been shown to have a positive effect on elevating metabolic rate.

Has been shown to increase urine production meaning a loss in water weight, it also has digestive properties by contributing in reduction of intestinal gas that can occur predominantly after a meal.

Used for regulating fat levels within the blood and for lowering blood sugar levels which can prevent harmful blood sugar spikes caused by large consumption of refined sugars. Ultimately preventing the body from storing as much fat after large meals.

Has its own uses within weight management because of its status as a ‘thermo nutrient’ which can use subtle methods to increase core body temperature allowing to expend calories more efficiently even while at rest.

The main purpose behind being included in this product however is so that it can increase the bioavailability of other ingredients in simple terms make them work better!

Take 1 to 2 capsules daily with food. 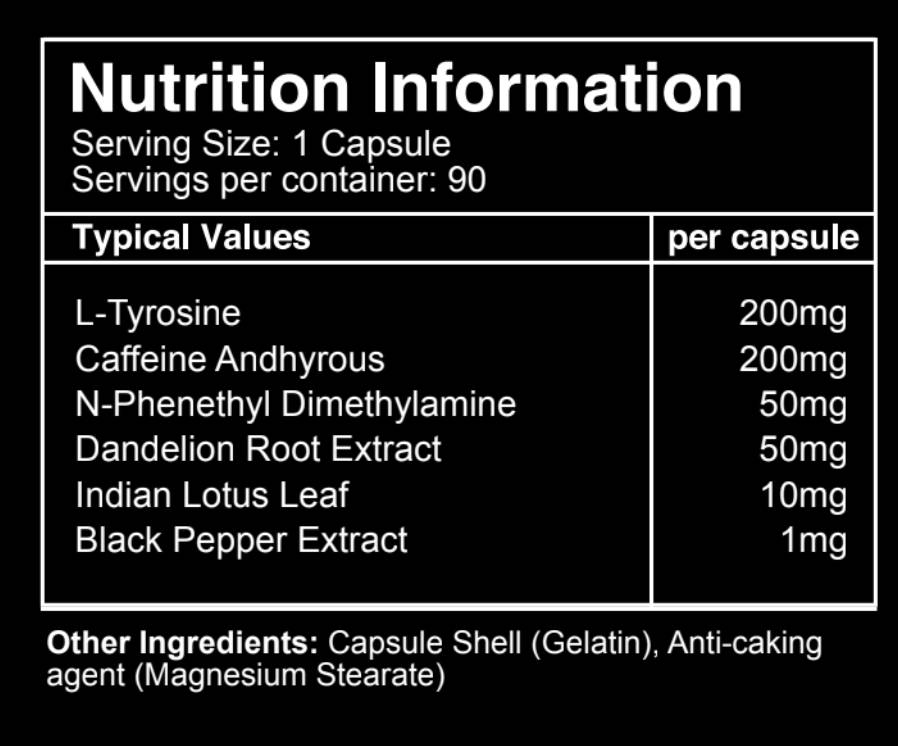